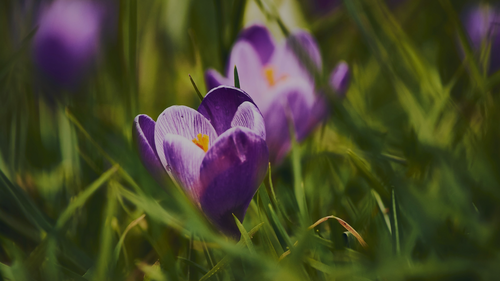 From John 20:1-18
As she’s mourning and weeping the loss of her Lord, Mary all of a sudden hears an undeniable voice that calls her by name. She turns around, and her heart blooms with an unexplainable joy. She trembles and clings to her Master with all of her heart, soul, mind and strength. Then Jesus responds to her trembling and says, “Do not cling to me, for I have not yet ascended to the Father.”

These words seem harsh and cold when we first read them, but sometimes it’s difficult to discern the intended tone of a text. If you’ve ever sent or received a text message that was taken the wrong way because the intended context or tone of the text was misunderstood then you get the idea. We have no good reason to believe that Jesus is being unreasonably cold or insensitive here towards Mary or that he is somehow rebuking her for hugging him in this moment.

These words are not a rebuke; they are reassurance that the Messianic hope that Mary and the rest of the disciples had given their lives too is still on track. The kingdom of God that Jesus had been teaching them about has in fact come into this world and is setting everything right again. The powers of darkness have just been disarmed, and so now it’s time for the work to begin.

Sometimes we find ourselves with this initial mindset of Mary. We cling to Jesus just thankful and content with the good news that the cross wasn’t the end. But Jesus wants us to realize the same thing that he wanted Mary to understand — that his powerful resurrection means much more than we initially realize.

Jesus’ resurrection is more than a happy ending; it’s a brand new beginning! The creator has brought forth a new world order out of the darkness and chaos of the cross.

Jesus says don’t cling to me because it’s the dawn of the new age and the beginning of a new creation. The kingdom of God has been launched, but now it’s time to put it to work in this world.

And so, our initial response to the resurrection should be overwhelming thankfulness and joy that leads us to embrace Jesus with all of our heart, soul, mind and strength celebrating the fact that he is alive. But then, may we also remember that he has risen for a very specific purpose. The kingdom of God has been launched, and the victorious resurrection of our King means that the revolution has begun.

We can’t just forget about the world and cling to Jesus. We must now go out into the world and serve our resurrected King by being his resurrection people. We are to be the new kinds of people in this world who are the visual signs and the special agents of this new way of life that will one day fill the entire earth — the kingdom way of life.

We are to be humble and prayerful servants of the risen King Jesus whose hearts have been transformed and whose minds have been renewed by the power of this good news so that we not only believe in Jesus’ resurrection but also reflect his passion, mercy, forgiveness and love in a way that helps to heal the world and that restores things back to the way they should be.

What started as a small group of followers in one particular region located on the other side of the planet has grown into becoming a movement that continues to infiltrate nations and transform people all over the world. Human history is a living eyewitness to the revolutionary power of Jesus' resurrection.

The King has risen, and the revolution has begun. And so as we celebrate the resurrection, may we (like Mary) prayerfully experience hope and reassurance from our risen Lord, and then may we see Easter as a new beginning and a fresh start to join in on the kingdom mission.

The King is risen!

The King is risen, indeed!