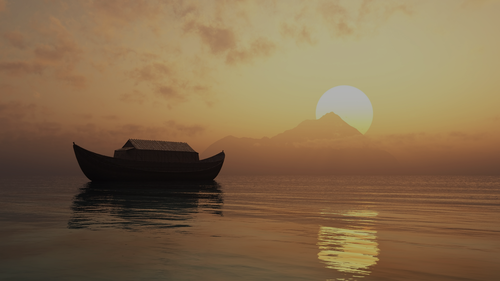 The following is an excerpt from our Genesis 1-11 Study on the app.

As we read about the downfall of humanity described in Genesis 1-11, we see the corruption of the creation reach a level that seems unimaginable by the time we get to Genesis 6. God’s boundaries are being crossed in a bizarre new way, and human wickedness is multiplying steadily throughout the earth.

In Genesis 6:2, we are told a mysterious story about the “sons of God” who were taking as many wives as they wanted and producing some of the giant warriors of ancient history. Whether these “sons of God” were rebellious angelic beings or ancient kings who claimed to be the descendants of the gods, the point being made in this story is that “a new stage has been reached in the progress of evil.” [1]

And as the Creator looks upon the condition of his creation, we read this devastating and intense description of what he sees. In Genesis 6:5-7, we read:

“The Lord saw that the wickedness of man was great in the earth, and that every intention of the thoughts of his heart was only evil continually. And the Lord regretted that he had made man on the earth, and it grieved him to his heart. So the Lord said, “I will blot out man whom I have created from the face of the land, man and animals and creeping things and birds of the heavens, for I am sorry that I have made them.””

It is hard to even imagine a more damning diagnosis of the human condition than these three sentences in Genesis 6. Every intention of man’s heart and mind was only evil continually. The intimately created creatures made in the Creator’s own image are ruining their lives and everything around them. And God like a loving Father who sees his own children self-destruct right in front of him is grieved to the point of regretting that he had made them.

Perhaps there is nothing that we overlook more than how much our bad decisions hurt the heart of God. In Genesis 6, we see that God is suffering on account of the sins of man.

The Creator’s heart is broken as he watches humanity ruin his good world and ruin one another. And so, it is out of a passion to protect the goodness of his world that God decides to wash it clean and give humanity a fresh start. We often look at the great flood that comes next as an act of God’s judgement against humanity (which it is), but we must not overlook the grieved heart of God that takes no pleasure in this kind of destruction.

2021
January
Noah's Ark and God's RegretJesus' Triumph
February
Not AloneWhat Are You Building Your Life On?What Does God Want From You?
March
How to Love
April
Training Ground
June
Infinite Joy
August
Summer Camps
October
Connection vs TaskThe Transition Into the Offseason is a Great Opportunity for Transformation and Change
December
Let's Read the Bible Together in 2022
2020
February
A Place of Refuge
March
An (Unexpected) Invitation to Rest
April
Be Anxious for NothingEaster: A New Beginning
May
The Voice of the Shepherd
June
There's Too Much Noise Right Now
December
2021 Bible Reading Plan